Trish Bertram, stadium announcer for the Final Ceremonies of the 2012 London Olympics and for theParalympics, will be doing the small voiceover in the book trailer for IN RETROSPECT, an upcoming science-fiction murder mystery by Ellen Larson (Nov 2013, Five Star/Gale Cengage). 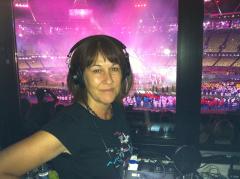 Trish Bertram at the 2012 Olympics

The above is the lead paragraph in the press release I just wrote as part of my ongoing promotion for IR. Needless to say, it was a pleasure to write—and something I never thought I would be writing. In. My. Wildest. Dreams.

How did this happen? Since this blog is about my experiences doing promo for my upcoming book, let’s move along to the second paragraph of the press release for the answer:

The book trailer is being made by artist Michael Sissons, who cold-contacted Ms. Bertram without knowing who she was as part of an extensive online search for just the right voice. Ms. Bertram, an announcer on British TV for over twenty years, promptly agreed to a small fee, stating that she was ‘all for trying to help a bit of entrepreneurialism.’

And that’s the truth.

Being around Mike is like being around a creativity furnace. All this incredibly cool stuff comes streaming off of him, and some of it hits you. For example, if you haven’t checked out the latest version of the book trailer, please do so here. Or just look at this pic from the trailer:

Is getting Trish Bertram a coup? A lucky shot? I don’t know. I’m just here to tell authors, not to go all New Testament on here, that it never hurts to ask.

I’m hoping that having Ms. Bertram aboard will help me get extra attention as I go forward with my promo. We’ll see—and I’ll continue to post updates, of course.

The press release ends with a link to the Kickstarter project I’m currently pushing, which, mind you, is now at 85% filled with 12 days to go (!):

This hook-up is only one example of the new normal for small press authors tasked with doing literally all their own book promotion. As part of their efforts, Larson and Sissons are running a Kickstarter project through April 12 to raise funds for the book trailer and other promotional materials.

That’s it for the press release.

So far, doing early promo for the book, and doing a lot of heavy promo for the book trailer Kickstarter project has been exhilarating. I think I’ve been very lucky to have Mike on board doing his incredible artwork, but I’m gonna look back.

For the curious, here’s a more detailed passage from Ms. Bertram’s Wikipedia page:

“Bertram has been a live TV announcer for over twenty five years, starting her career in 1982 with London Weekend Television. She is the longest serving female television continuity announcer in British television, and is particularly well known for her work with LWT, where she worked on and off for over twenty years – starting as a local cover announcer for Channel 4 transmission before becoming a duty announcer alongside colleagues such as Peter Lewis, Sue Peacock, Ruth Anders and Keith Harrison. Bertram and the rest of the announcing team also read short LWT News Headlines bulletins in-vision during shifts.” 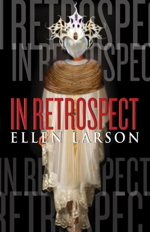